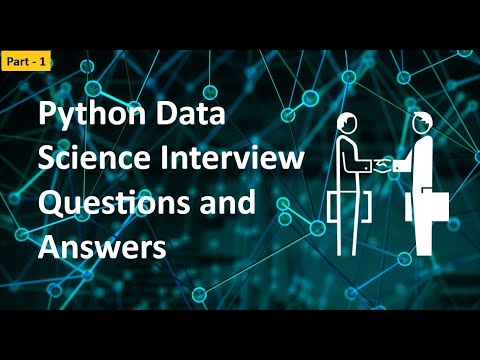 In this article, we will discuss the many possible questions asked in the interview round. The interview was average and the questions were related to the educational background of the applicants and the projects taken during their college. Get the Upcoming & Current Private Jobs Here

How to prepare for Python data science interview questions?

While there is no standard way to prepare for Python data science interview questions, a good understanding of the basics never goes amiss. Some important topics to keep in mind for Python interview questions for data science: Basic control flow for loops, while loops, if-else-if statements, different data types and data structures in Python, pandas and their various functions, and how to use list comprehension and dictionary. Get the Graduate Jobs here

Will Python be allowed in coding interviews?

While the simple answer is yes, it varies from company to company. Python may be allowed in coding rounds, and many companies use sites to conduct Python data science interview questions. Like this more Engineering Jobs, kindly use this link to view it

How long does it take to learn Python?

Generally, it takes two to six months to learn the basics of Python. But while you can understand the language at least the basics in minutes, it can take months or even years to fully master a programming language. However, it doesn’t take much time to prepare for Python data science interview questions. To avail of exclusive job offers, join our Telegram Channel page now

ANSWER: Filter literally does what the name says. It filters elements in a sequence.

Note: how all elements not divisible by 2 have been removed.

(Q) Does python call by reference or call by value?

ANSWER: Be prepared to go down a rabbit hole of semantics if you google this question and read the top few pages.

Let’s see how this works with strings. We’ll instantiate a name and object, point other names to it. Then delete the first name.

What we see is that all these names point to the same object in memory, which wasn’t affected by del x.

Here’s another interesting example with a function.

Notice how adding an s to the string inside the function created a new name AND a new object. Even though the new name has the same “name” as the existing name.

ANSWER: Note how reverse() is called on the list and mutate it. It doesn’t return the mutated list itself.

(Q) How does string multiplication work?

ANSWER: Let’s see the results of multiplying the string ‘cat’ by 3.

The string is concatenated to itself 3 times.

A list is outputted containing the contents of [1,2,3] repeated twice.

ANSWER: Self refers to the instance of the class itself. It’s how we give methods to access to and the ability to update the object they belong to.

Below, passing self to __init__() gives us the ability to set the color of an instance on initialization.

(Q) How can you concatenate lists in python?

ANSWER: Adding 2 lists together concatenates them. Note that arrays do not function the same way.

(Q) What is the difference between a shallow and a deep copy?

i) Reference the original object. This points a new name, li2, to the same place in memory to which li1 points. So any change we make to li1 also occurs to li2.

ii) Create a shallow copy of the original. We can do this with the list() constructor, or the more pythonic mylist.copy() (thanks

iii) Create a deep copy. This is done with copy.deepcopy(). The 2 objects are now completely independent and changes to either have no effect on the other.

(Q) What is the difference between lists and arrays?

(Q) How to concatenate two arrays?

ANSWER: Remember, arrays are not lists. Arrays are from Numpy and arithmetic functions like linear algebra.

We need to use Numpy’s concatenate function to do it.

(Q) What is Python, and what is it used for?

ANSWER: An interpreted high-level, general-purpose programming language, Python is often used in building websites and software applications. Apart from this, it is also useful in automating tasks and conducting data analysis. While the programming language can create an array of programs, it hasn’t been designed keeping in mind a specific problem(s).

(Q) What are the different built-in data types in Python?

ANSWER:  % (Modulus operator) is responsible for returning a remainder after the division.

// (Floor division) it rounds off the quotient to the bottom.

(Q) What is the lambda function?

Yet another important question in this list of Python data science interview questions. So prepare accordingly.

(Q) What is the difference between range, xrange, and arange?

(Q) How do you differentiate between global and local variables?

(Q) Explain how Python data analysis libraries are used and list some common ones.

(Q) What is a negative index used for in Python?

ANSWER: Negative indexes in Python are used to assess and index lists and arrays from the end, counting backward. For instance, n-1 shows the last time in a list while n-2 shows the second to last.

(Q) Explain a Python module. What makes it different from libraries?

ANSWER: Coding convection PEP8 contains coding guidelines. These are a set of recommendations put together for the Python language that make the language more readable and easy to use for users.

(Q) What are generators and decorators?

ANSWER:  The generator function is responsible for simplifying the process of creating an iterator. A decorator manipulates pre-existing functions or their output, which it does by adding, deleting, or altering characteristics.

(Q) What is an Eigenvalue and Eigenvector?

ANSWER: Gradient descent is an iterative procedure that minimizes the cost function parametrized by model parameters. It is an optimization method based on a convex function and trims the parameters iteratively to help the given function attain its local minimum.

(Q) What do you understand by logistic regression? Explain one of its use-cases.

ANSWER: Logistic regression is one of the most popular machine learning models used for solving a binary classification problem, that is, a problem where the output can take any one of the two possible values. Its equation is given by

ANSWER: K-means clustering algorithm is an unsupervised machine learning algorithm that classifies a dataset with n observations into k clusters. Each observation is labeled to the cluster with the nearest mean.

(Q)How will you find the right K for K-means?

ANSWER:To find the optimal value for k, one can use the elbow method or the silhouette method.

(Q) What do you understand by feature vectors?

ANSWER: Feature vectors are the set of variables containing values describing each observation’s characteristics in a dataset. These vectors serve as input vectors to a machine learning model.

(Q)How beneficial is dropout regularisation in deep learning models? Does it speed up or slow down the training process, and why?

ANSWER: The dropout regularisation method mostly proves beneficial for cases where the dataset is small, and a deep neural network is likely to overfit during training. The computational factor has to be considered for large datasets, which may outweigh the benefit of dropout regularisation.

The dropout regularisation method involves the random removal of a layer from a deep neural network, which speeds up the training process.

(Q) What do you understand by interpolating and extrapolating the given data?

(Q) Why would you use enumerate() when iterating on a sequence?

ANSWER:enumerate() allows tracking index when iterating over a sequence. It’s more pythonic than defining and incrementing an integer representing the index.

(Q) What is the difference between pass, continue and break?

ANSWER: This for loop.